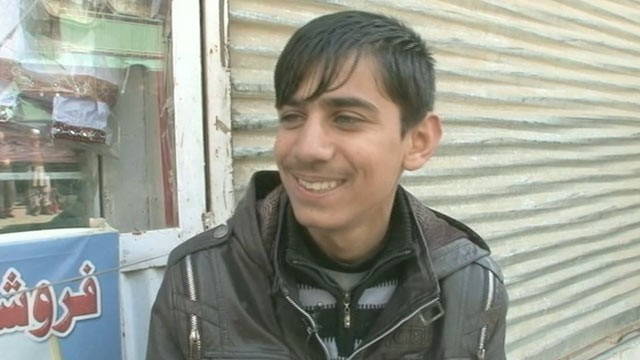 ABC News
Fawad Mohammadi, pictured in Kabul,...
View Full Size
When 14-year-old Fawad Mohammadi boarded a plane this week at Kabul's International Airport, he was carrying so much more than the airline's two-bag allowance.

Like, the weight of an entire country on his shoulders.

Mohammadi is the unlikely star of the hit film "Buzkashi Boys,"nominated in the Best Live Action short category at this year's Academy Awards. The film follows two young street kids who grow up dreaming of playing buzkashi, Afghanistan's national sport. The game is similar to polo, but played with a goat or sheep carcass.

In the film, Mohammadi plays the gritty son of a poor blacksmith who is told that like his forefathers he too would eventually assume the family business. In real life, Mohammadi knows all about life on Kabul's harsh streets. For the past seven years, he's been hawking street maps and used magazines on the city's famous Chicken Street, a place where foreigners often come to buy Afghan goods. For years, it was the only way he could to support his mother and four siblings after their father passed away.

Two years ago, thanks to a random encounter with American filmmaker Sam French, Mohammadi's life changed forever. French was in Afghanistan starting up a new initiative called the Afghan Film Project, lending his expertise to a group of Afghan filmmakers, helping them tell Afghan stories in their own words. Their first project, "Buzkashi Boys," cost less than $4,000.

He cast Mohammadi in one of the lead roles. Alongside fellow Afghan child actor Jawanmard Paiz, Mohammadi's performance is receiving critical acclaim. His deep, wide eyed innocence and expressive silences in the film are haunting, giving "Buzkashi Boys" a gravitas far beyond it's relatively meager budget. The film is widely seen as a success story, proof that Afghanistan's film industry can be revived after years of being suppressed by the Taliban and more than a decade of war.

"Anybody who watches the film will come away thinking it's really well done," says Jean Manes, counselor for Public Affairs at the U.S. Embassy. After "Buzkashi Boys" was nominated for the Oscar, the embassy set up a special screening, including an autograph signing session for the kids.

"There's a whole vibrant society here," Manes adds, "from film to music to education. Lots of really positive things are happening here, and it's really important that the American public see that."

Growing up, Mohammadi's family was so poor they couldn't afford a television set. He'd heard of the Oscars before, but has never seen the ceremony. Now, as he prepares to walk down the red carpet for the first time, he already knows who he wants to meet.

"I want to meet Rambo," he told ABC News recently, taking a break from his job on Chicken Street.

A few weeks ago, Mohammadi didn't think the trip would ever happen. He couldn't afford the airfare. Thanks to donations from Turkish Airlines, logistical support from the U.S. Embassy, and a crowd-funding campaign that raised more than $10,000 ? the remainder of which will go towards Mohammadi and Paiz' education ? Mohammadi will be walking down the red carpet.

While in Los Angeles, Mohammadi and Paiz will be staying with relatives of the film's Afghan co-producers. And once the ceremony is over, the State Department will fly them to Washington, DC for a special screening. They'll also be going to Disneyland.

For Mohammadi, whose skinny frame belies a quiet sort of confidence, win or lose, he hopes the world ? or at least the hundreds of millions who will be tuning into the Academy Awards ceremony ? will hear his simple message.

"We're not terrorists," Mohammadi says. "Afghanistan is a peaceful country. A good country."

A country whose Oscar dreams now rest on the shoulders of two young boys, and the hope they represent.