“The rebels committed grave abuses in my hometown in March 2013. They killed my brothers in cold blood. I only survived because my wife allowed herself to be raped, in order to protect my life. Having seen these atrocities, I decided to avenge the deaths of my brothers, going to any lengths necessary to get retribution.”

Antonio lives in the Central African Republic (CAR). Plagued by coups, competing rebel groups, and self-declared leaders, CAR is one of the poorest countries in the world.

In March 2013, rebels once again overthrew the government. Called Séléka, they are majority Muslim in a country where 80% of the population is Christian. Fueled by past grievances, the Séléka ransacked the country, murdering, raping, and looting. Antonio’s family were victims of these crimes.

“So, I joined the guerilla war with other youth in the same situation as me. We fought Séléka on all sides. They were swept away with enormous losses among their men. You can still see the carcasses of their vehicles.” Calling themselves the “Anti-Balaka” or “anti-machete,” Antonio and his fellow militiamen became the violence they wanted to defend against. Both sides’ mass atrocities and crimes led to a cycle of violence, at times verging on genocide.

Our team organized quickly in response to the devastation. We reached out to armed groups about effectively protecting their communities nonviolently. We followed up with radio programs and other community actions. Antonio attended one of our trainings. 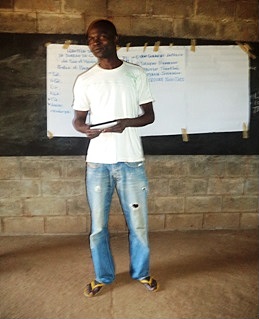 “After the discussions on human rights, peaceful resolution of conflict training, and radio programs, I decided to take a solemn oath to commit myself to making peace and to being an activist for reconciliation in my community. My objective is to encourage and sensitize the people in general, and the Anti-Balaka in particular, so that together we can make peace.” Antonio began organizing young guerilla fighters, encouraging them to become champions of peace.

Antonio’s courageous transformation was clear when, one afternoon, he came upon an armed Muslim herder alone and hiding in the rural countryside. Instead of attacking him, Antonio protected the lost man, taking him to shelter. The man eventually reunited with his family. Antonio and his men are currently protecting five Muslim families.

A few weeks ago, Séléka and Anti-Balaka representatives signed a ceasefire agreement in neighboring Congo. Tensions remain, but this pause in the fighting allows us to empower more individuals like Antonio to put down their weapons and find non-violent means of resolving their differences. Antonio’s striking transformation is one of many, demonstrating the will and ability to change.

To learn more about our work in the Central African Republic, click here.